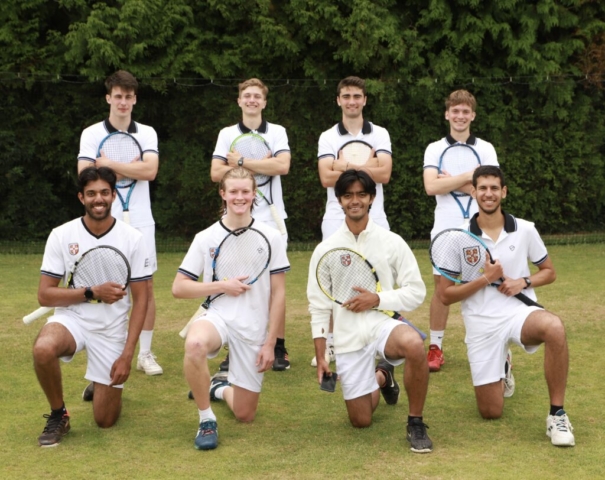 After comically being told to warm up on clay, with our Oxford counterparts at a ‘prior engagement’ while we turned our shoes orange, the M2 squad arrived at the grass in University Parks in good spirits and eager to make the most of the upcoming weekend. After a brief warm-up to acclimatise to low nets and a knobbly meadow of a grass court, Cambridge’s 1st, 3rd and 5th singles seeds opened proceedings. Victor Baycroft faced a challenging leftie, with an admittedly adequate grass-court game. Such was the slice on the Oxford man’s serve that the home side drew first blood: 1-6 2-6. Reece Patel showed impressive focus – once he identified that he needed only to be more consistent than his opponent, he dispatched Oxford’s 6th seed 7-5 6-1. Louis Shaw faced a hard-hitting foe, but our man’s beautiful returning and effective counter-punching saw off the challenge 6-4 7-5. After the first round of matches, Cambridge was up 2-1.

As Louis and Reece wrapped up their matches – basically at the same time – Krishna Amin was already underway against Oxford’s 3rd seed. Theirs was a tightly fought contest, with solid ball-striking on both sides of the net underpinning some very decent tennis. Meanwhile, Dan Bacon faced Oxford’s gritty 1st seed, falling 2-6 1-6. Pravin Steele was bested 3-6 5-7, having been handed the arduous task of playing Oxford’s 5th seed, one who left much of the pace generation to his opponent. As Dan and Pravin joined the spectators, Krishna was still going, having lost the first set 4-6. Breaks of serve were traded back and forth, pushing the second set to a tiebreak. It was not to be, however – the tiring Oxford man constructed a strong tiebreak (credit where credit’s due) and avoided a third set, taking the rubber 4-6 6-7(2). Krishna later said that the match hung on ‘four smashes and a volley’ – all of which he missed.

The opening game for fresh-faced Joe Wherry and Cameron Burnett could have been an easier one, against Oxford’s 1st pair, but the two jumped on the opportunity, taking the first set to warm up and then producing a strong show of doubles, pushing the opponents far, but not quite far enough: 2-6 4-6. Victor and Pravin fought a tight struggle against an adept Oxford 3rd pair, with the Oxford side clinching the important points to win out 3-6 3-6. The power couple of Louis and Dan took the first set to scout out their opponents – the Oxford 2nd pair – and lull them into a false sense of security by losing the first set 3-6. After plenty of Cambridge shanks, the pair turned the tables with big serving from Dan and big returning from Louis, hitting back with an emphatic 6-2 and a comfortable 6-4: 3-6 6-2 6-4.

Joe and Cam continued their form into the final round of doubles, but Cam’s strong serving and Joe’s decisive volleying were just edged by Oxford’s 2nd pair in a match that really could have gone either way – 6-7(5) 4-6. Victor and Pravin had another tough session at the office, capitulating 3-6 3-6 once more, this time to the Oxford 1st pair. Once again, however, Louis and Dan gave the crowds yet another blockbuster – Dan’s tweener lob winner was surely the shot of the weekend. Having lost the first set 3-6, the Cambridge pair switched on, saving match points in the tiebreak to clinch a nail-biting second set 7-6(8), showing incredible mental fortitude and tactical clarity, no doubt buoyed by the lively Cambridge support – Louis’ set-winning forehand return earned the loudest crowd roar he’s known. Oxford then went up 2-5 in the third and all looked lost, but as the sky turned red, our men raged against the dying of the light with an incredible comeback, pulling the set level at 6-6. The match continued without a tiebreak, but the killing blow was almost immediate, with Cambridge taking the rubber 3-6 7-6(8) 8-6. It was fortunate Louis and Dan finished the match when they did, for we may have had to source some bicycle lights had it continued any further. I think both sides would agree that the match had been a thrilling end to a great day of tennis, with ended with Oxford up 4-8.

The good weather of Saturday vanished on Sunday. With the grass too slippery for proper play, and the forecast looking less than great, the match relocated to the Magdalene College all-weather courts, a curious surface that was novel to most of us. In stark contrast to grass, these courts were slow, grippy and loved a topspin ball. The change of conditions did not deter Cambridge (in fact some of us may have enjoyed the switch) as Dan and Pravin opened play against the Oxford 2nd and 6th seeds respectively (there were only two usable courts). Dan, nursing a flaring pre-Varsity injury, put in a valiant display to push the first set to a tiebreak, but ultimately lost 6-7(3) 0-6. Pravin, arguably on his home surface, showed great patience and resilience to best his opponent 7-5 6-4. Krishna came on next against the Oxford 4th seed, dismantling his opponent with strong shot-making to take perhaps the most convincing Cambridge win of the weekend – 6-2 6-2. Reece completed a hattrick of wins for Cambridge – strong cross-court forehands were enough to win our man the rubber 6-3 6-3 in a perfect demonstration of determination and focus, worthy of any playbook.

Louis and Victor rounded off the weekend’s singles matches with the overall score at 7-9. Victor tussled against the Oxford 3rd seed, who could not seem to put a foot wrong: 2-6 0-6. Louis had yet another marathon match, this time against the Oxford 1st seed, whom he had realised ‘was superior to him in everything except height and university’. After a dominant first 6-2 first set, the Oxford man fought back to take the second set 4-6, as the Cambridge side once again struggled to deal with receiving a lack of pace. Due to the scarcity of courts and time, a match tiebreak to 10 was played, and Louis played some more beautiful tennis to give himself match points at 9-7. At 9-8, our man left an Oxford forehand that we all thought was sailing out, only for it to drop inside the baseline. A further two points meant that Oxford sealed the rubber 6-2 4-6 9-11, and thus won Varsity.

Having wrapped up the fixture, the Oxford side amusingly suggested that the final round of doubles be ‘a casual set’. This was enthusiastically refused, so with all three courts in operation, the last three matches got underway. Louis and Dan faced the Oxford 1st pair, who, presumably having been relieved of pressure now that the result was decided, played really quite well, taking the rubber 1-6 1-6 while tagging Louis in the temple in the final game. The great team of Joe and Cam, having once again taken the first set to warm up, put up another great fight, with their trademark big serving and surgical volleying, but regrettably, it was enough to force a match tiebreak, with the Oxford 3rd pair winning 2-6 6-7(4). Victor and Pravin put on a convincing performance to take their fixture 6-3 3-6 10-5, giving an overall score of 8-13.

Many thanks to the whole team for great tennis and great company throughout the weekend, to Oxford for hosting, to the Executive Committee for making it happen, and to all the friends, family and one past captain who came to support.

Click here for Varsity from the perspective of Louis Shaw.